A Testimony of Faithfulness 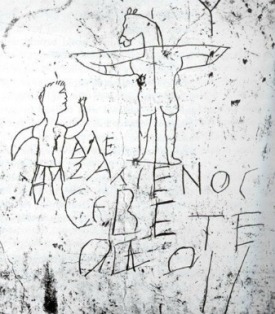 Have you ever heard of the Alexamenos Graffito? The Alexamenos Graffito from the third century is believed to be the earliest depiction of Jesus’ Crucifixion. The graffito however is not a honorary picture of Christ or Christians. The carving, found in the plaster of a Roman guard room, shows a young man raising his hand in what is believed to be an act of worship. The focus of his worship is a man with the head of a donkey being crucified. With the drawing these words are written “Ale Xamenos Sebete Theon” which is translated to Alexamenos worships his God.[1]

Early Christian writings let us know that one of the common mockeries of the time was to claim that Christians worshiped the image of a donkey. It was church father Tertullian who recorded that “lately a new edition of our god has been give to the world in that great city: it originated with a certain vile man who was wont to hire himself out to cheat wild beast (dodge wild animals in the arena), and who exhibited a picture of this inscription: The God of the Christians, born of an ass. He had the ears of an ass, was hoofed in one foot, carried a book and wore a toga.“[2] Although a mockery the inscription shows that Christians have worshiped Jesus as God from its earliest origins.

Christians today live in a time not totally unlike the third century time of Alexamenos. Although there is a wide acceptance of Christ and Christians there is also a large plurality deities and religious outlooks. As the plurality grows the acceptance of Christianity naturally diminishes. Along with the diminished roll it is not surprise to find a variation of claims surrounding Christ. Most meant to detract from Jesus’ deity and discredit the claims of the Christian faith.

But in 1870 found in a room not far from the degrading carving another carving was found that read, “Alexamenos Fidelis” meaning Alexamenos is faithful.[3] It seems maybe Alexamenos or someone else responded to the mockeries simply by pointing to his faithfulness. Let us today do the same. We may not always know exactly how to respond to every contrary claim and detraction concerning Christ. Additionally we may find ourselves in an environment that is ubiquitous in its hostility to all things Christian. Whatever atmosphere in which we might find ourselves let it be said that we were faithful to our God, Jesus Christ.

I dedicate this entry to Pleasant Williams.  For to his family and to his God he was faithful.

[1] Joseph M. Holden and Norman Geisler, The Popular Handbook of Archaeology and the Bible (Eugene, OR: Harvest House Publishers, 2013), 308.

View all posts by Rob Jones

Robert Jones is founder of knowledgeandproclamation.com. His goal is to use all of his talents as a son, husband, father, engineer and apologist to strengthen the faith of every believer.

You can avoid the debate over contested issues of the faith if you choose. You need only drift with the current…The great questions may be easily avoided. Many preachers are avoiding them and many are preaching to the air…The church is waiting for men of another type.